Steve and I are here for a long weekend for MegaCon, a huge comic/ sci fi/ fandom convention. We drove up early on Friday and after checking into our hotel, came to the Con for a few hours to wander, gawk, snap pictures, and attend a few panels. It’s my first Con and a total blast!

After a few hours at the Con, we had dinner with Marie and Eric at Adobe Gilas at Pointe Orlando. Dinner and the company was fantastic, but poor Steve had been up for 27 hours by the time we crashed back at the hotel around 10:30. It was an early night for us all due to Steve’s 27 hours awake and Marie’s working at the butt-crack of dawn the next morning. 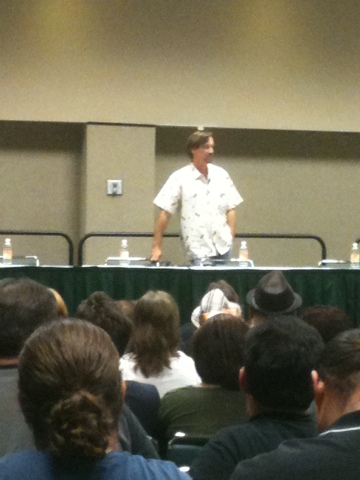 Saturday we got up super early (a by-product of going to bed super early) and took our time getting ready, eating at Golden Corral (surprisingly good!), then heading back to drop my car off and head to the Con via the I-Drive trolley. I’m actually pretty annoyed that no one at the hotel told us it took exact change only. We didn’t want to spend another $8 on parking, so we walked the 0.8 miles. I know, this doesn’t sound so horrible, right? However, we’ve been walking the equivalent of several (10+) miles each day and my feet already hurt.

C’est la vie! We walked. As Steve sat in on panel after panel, I wandered the main exhibit hall with my cousin Audrey and her daughter Melanie. Mel had her Yellow Rick Road Productions sign and was having fun snapping pictures of costumed attendees and comic book artists holding the sign. I sat in on the James Marsters and Stan Lee (!!) panels with Steve, until he went off to others he was  interested in.

After a full day of panels, pictures, gawking and enjoying ourselves, we slowly walked back to the hotel and had an early dinner at Johnny Rockets at Pointe Orlando. Mmmm milkshakes and sandwiches. From there, we drove out to East Orlando and spent a few hours with his great aunt and his cousins. Mr. Up-at-4:30am was perfectly fine being out till after midnight. I, on the other hand, was falling asleep on the couch.

Sunday we were up early again, had breakfast at Golden Corral again, then drove to the Con. To me, it was a much more chill day after the insanity and thousands of people on Saturday. We attended a few panels together, then I took off to walk the entire exhibit hall floor, row by row, as he sat in more panels. Seeing Steve so excited was great. He was in his element learning about publishing comics and furthering his passion for drawing. We had dinner at Cattleman’s on I-Drive then ended up back at the hotel where we fell asleep early, yet again. Cattleman’s was good food, but grossly overpriced! $80+ for 2 steaks, a la carte everything and $6 small soups is ridiculous in our opinions!

On Monday, we slept in, checked out of the hotel and then went off to look at the house Steve lived in for several years, then visited again with his family for several hours before getting on the road home. Sadly, it rained like crazy the entire day and followed us back to Miami.

All in all, the weekend was fantastic and I couldn’t be happier that we went. It was like a mini-vacation perfect for our 6 months (almost) of being married.

** These are crappy iPhone camera pictures and I do apologize for their graininess. I have hundreds of higher quality photos that I’ll be posting soon enough. **

2 comments on “Coming Atcha From MegaCon in Orlando”