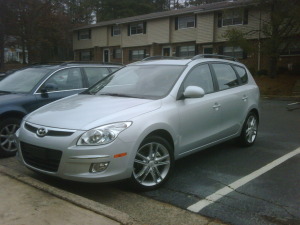 Luna: no UF or ECU stickers yet, she was still new

My current mode of transport is a 2010 Hyundai Elantra Touring crossover wagon. Her name is Luna and she’s silver and has huge amounts of storage space. The left side of the car has the University of Florida alumni stickers and the right has the East Carolina University alumni stickers. Luna is an equal opportunity fan of my education and the Gators and Pirates. =)

I honestly never thought I’d own a Hyundai again. Two cars ago, I had a Hyundai. She was great until about 55k miles then things just started going wrong. Actually, long before that the back window leaked and my entire trunk was covered in water and mildew. Yeah, it was gross. So gross that I took out the carpeted layer and threw it out. I was really fortunate to turn the Sonata in for a huge trade-in value to purchase my super sporty red sparkly Mazda 3 Sonata that I named Moxie Crimefighter.

Moxie was an awesome, fun to drive 5-speed sports car. I loved her, adored her, drove everywhere in her. But she just wasn’t big enough to put anyone in the back seat let alone future rear-facing baby seats. I knew it was only a matter of time that I had to let her go. With my impending graduation, I knew most car companies offered incentives for graduates.

So I did my research. I googled all sorts of mini SUVs and compared storage space to find the biggest. One night we went to Borders and I sat for hours scouring Car & Driver, Consumer Reports and a bunch of other car magazines. Even though it had only hit the market in 2009, the Hyundai Elantra Touring had ridiculously high marks. It consistently scored at the top of all the categories AND had the most storage space. Like I said, I was shocked that I was heavily considering another Hyundai.

On January 23rd, I went in for a test drive and spent the next several hours negotiating a considerably lower than sticker price. Want to read more?