We crashed pretty hard Saturday night very early for both of us. To say it was an emotionally draining day would be putting it quite mildly. After all, it’s not every day that you get to spend several hours with a child that might be your daughter in the future.

OMW I can’t even write that without tearing up. Daughter. 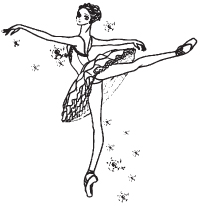 Yesterday we woke up, dealt with what we needed to deal with then got out of the house to go walk around the mall. On the way there, we called Ballerina’s therapist (TH) to see if there was any way possible to see her again. About 45 minutes later after our first round around the [closed] mall, TH called back and said he’d see if he could coordinate it. About 15 minutes later he called back and said we could meet them in 2 hours. Great, we had time to chill and to take our lunch leftovers back home.

Our first stop was to get Ballerina some lunch, so we went to Johnny Rockets. We all got milkshakes, I had sweet potato fries, and Ballerina and TH had lunch. There was a balloon guy walking around and he called Husband “dad” when he asked if she wanted a balloon animal. She didn’t. I’m not sure if TH or B caught it, but we did! I also found out that she’s scared of balloons bc they pop and startle her. Of course while we were there, one popped and she jumped. She’d never had sweet potato fries and I offered for her to try mine. Apparently they taste like cake. I was seated across from her and we were trying to keep up the conversation but it was awkward and really loud in there. We would just look at each other then she’d get all shy and grin and hide behind her hands. Adorbs.

After lunch, we went to Hot Topic and she picked out a [Supernatural] Dean keychain and a Dean and Sam pin for herself and kept pointing out Doctor Who things for me. I picked out a car magnet and asked her which pin I should get. My choices were a Muggle pin, Whovian pin or Minion pin. She said to get the Whovian one bc I love it. Smart kid! I was holding the Dean keychain and she was going on and on about how he’s her future husband. I made a comment that I was holding her future in my hands… in more ways than one. Not sure the others picked up on that.

Afterwards we walked down to the Sanrio store. When we were walking around earlier, we spotted a sign on their door that said straight A students get 15% discounts and snapped a photo to show her. She was so excited bc she is a straight A student and loves Hello Kitty. I checked my phone and saw several missed calls and texts while Husband walked around with her. We were trying to give her some space but she was staying pretty close.

She showed TH her pin and keychain – he didn’t see us buy them – and he made a comment that [Crush] is out of the picture apparently. Of course, we had to ask her who he was. She got this big grin on her face and took out her phone to show us his photo. She showed me first and he was sitting with a dog. I told her Husband was going to mention the dog. He did. First thing. Crush is a cute kid, attends her school and they have 3 classes together.

Um, I never told my parents about my crushes, boyfriends, etc. they were lucky to know my friends names. They certainly never saw photos!

From Sanrio, we walked down to Game Stop to look at Wii and computer games. Ballerina and Husband bonded over games they’d both played and I picked out things that looked interesting. TH told us her ride was heading to the mall to pick her up so if we weren’t buying anything, we should head to the meeting point.

While we walked, I was in front with her and told her that this was her life too and, while we want to keep hanging out with and getting to know her, she had to be OK with it as well. I made sure she understood that. Her life. Our life. Everyone had to be good with it. She said she was. I said we had no plans next weekend if she wanted to see us again. She said she did. I kept getting that elusive smile of hers. What a gem it is!

She was exhausted – we all were – and sorta napped while we waited. I may have snapped a photo of her with her head on the table and hair covering her face. I may have posted it on my [private and very locked down] FB. Then again, maybe not. 😉 The group home van came to pick her up and she crawled into the back seat. No hugs today. But when they came back around the parking lot, her little arm waved at us from the back. [I think it was hers, but Husband says it was another girl’s arm.]

We sat there for a while talking to TH about Ballerina and the next steps. We’ve now had 2 supervised visits with him present. He is going to recommend that we be allowed to do unsupervised visits and pick her up and drop her off for some semblance of normalcy. He also suggested that we bring her to our house so she can see it and see her room. I don’t think the visit was supposed to focus on us staying here for a long time, just to show her then go do other stuff. Whatever the case, it means a deep and thorough cleaning as her room is currently storing boxes since we had no idea how long this process as going to take.

As we were leaving, he asked if we’d thought about names. He said calling us mom and dad [shiver. gulp.] was far too soon, but what would we like her to call us. I said “uh, Becca and Steve?” which I thought was a given, but whatever. He said he’d bring that up with her in their next session. Mom. Dad. Eeep!

I am a knitter. You knew that, right? I am crazy about fibers and knitting and finding new patterns and really want to design my own items one day. I’ll probably start with a shawl/ wrap as it’s pretty easy to design a flat triangle of fabric. Or at least I assume so. Yep, I used the word assume. 😉

Anyhow, I am a member of the Free Pattern Testers group on Ravelry. Ravelry, of course, being my favorite site on the entire internet. OK, maybe not, but you get what I mean.

So a few weeks ago, I signed up for a test knit for some super cute fingerless gloves. Sure, it took me a lot longer than the rest of the testers, but I’m immensely pleased with how they turned out! Of course they’re Gator colors. I used stash yarn that I had sitting in a box from years ago and since there wasn’t enough for both gloves, I alternated the colors. So they’re kinda like the Weasley twins… the same, but different. 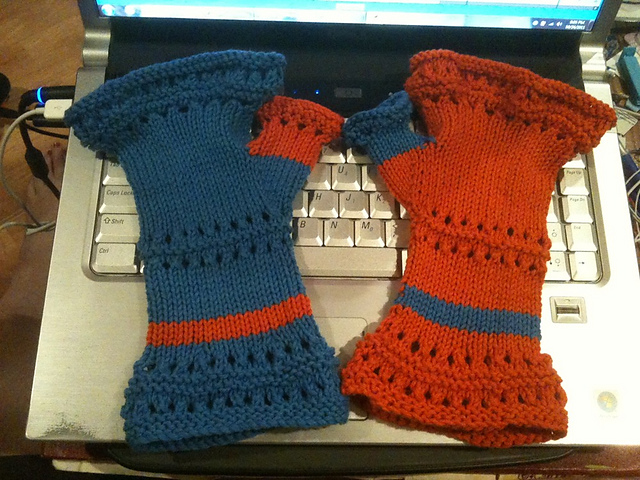 I just got my owl invite into the fab Pottermore site! Yep, I’m one of the first million or so able to enter and explore before the mass opening in October.

If you are already on there, add me! And leave a note who you are so I can add you as well. My Potter name is JinxDust63 and now I’m off to get my wand and be sorted.

Pottermore is a unique online reading experience from J.K. Rowling, built around the Harry Potter books. Share and participate in the stories, showcase your own Potter-related creativity, and discover additional information about the world of Harry Potter from the author herself.

Great piece of Harry Potter stuff out there. Go forth and laugh you butts off!