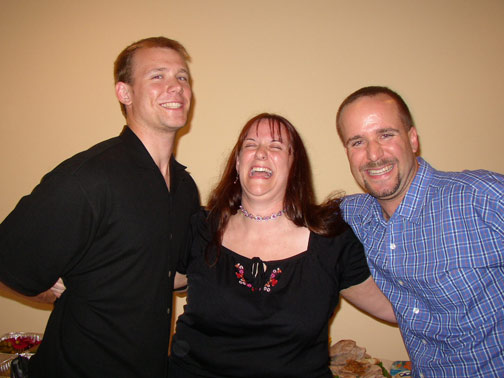 it may be 4 years old, but it's the only one I have of the 3 of us together

I have two brothers, one older (B, right) and one younger (D, left). Our relationship has been rocky, at best. When we were younger, D and I would gang up and tattle on B. then they would gang up on me. Yeah, it was fun times. We all loved to cook together; making pancakes every weekend, cake, and muffins. We had one of those love hate relationships.

My brothers are the reason I have a split left ring finger, a scar a mere 1/4″ from my eye and several other scars I’ve had almost my whole life. The smiley face scar on my left forearm is a result of a drunken spring break debacle, though I’d love to blame it on them too. D got the corner of a hard plastic spatula to the back of his head (leaving a patch where no hair grows) for stabbing me in the hand with scissors. Yeah, double ouch.

In college, B and I lived together, in the house we purchased my sophomore year, for several years after he graduated. We got along decently, had friends in common, and partied together. It was great, until he met Dave. Dave got some weird stuff into his mind and that was the beginning of his downfall. He got mixed up in some weird crap and we haven’t had a real conversation in years. I have not spoken to B since we moved back to Miami 5 months ago. As much crap that he’s mixed up in and successfully alienated all of our mutual friends and most of our family, he is still my big brother that protected me (sometimes) growing up.

D and I never really had much in common other than being blood related. I lived in a different city for a lot of his younger life. I moved to Gainesville when he was 14 and for the brief time I was back in Miami before heading to Orlando, he was off with his new friends working on cars and acting like a teenage boy.

Fast forward to last April when we visited Miami and met D’s fantastic girlfriend. Sure, she and I were already Facebook and g-chat friends, but that’s OK. She’s made a huge difference on his life. [Mostly] gone are the days of the sullen boy with a major attitude and the kid that avoids the family in lieu of hanging with friends working on various vehicles. Now we have weekly dinner with her whole family and our whole family and any friends that want to join. It’s awesome. D is more grounded and actively involved in family affairs, even if just the weekly dinners. He comes over and helps dad with mowing the 8+ acres and other landscaping. He smiles and laughs and is actually coming to Vegas with us for our wedding. Yeah yeah, it’s their vacation too, but still. A few years ago, this never would’ve happened.

At least I still have one sibling left and an almost sibling-in-law. I totally think of D’s girlfriend as my sister already. Now they just need to admit that they’re in a relationship and get married so she’s officially my sister. Love you Cat! Oh, and you too D. =)

In the above picture, I think I was being pinched and tickled by both of them.